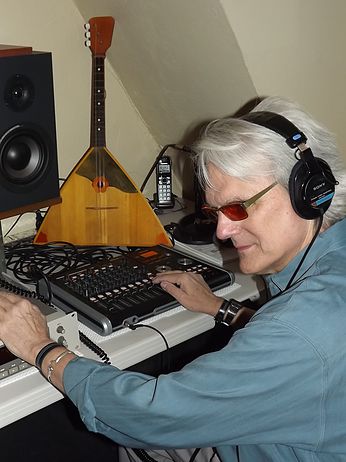 Jeff Moyer has been called resilient, unstoppable, and unbelievable. He has applied his talents in numerous and diverse areas, all of which have opened hearts and minds toward bettering the human condition. His perspective can be found in his music, books, and NPR commentaries.

When he was five, Jeff’s parents were told by a clinician that he was pretending he couldn’t see. Through those difficult years, Jeff gained hard-won insight into the isolated outsider who struggled both in the classroom and on the playground. Also, at age five, his baby brother Mark was born with a severe cognitive disability. The agony of his childhood sensitized Jeff to the needs of those suffering from severe bullying, a problem that Jeff also endured. At nine, Mark was institutionalized in a brutal state facility, a crushing life experience that taught Jeff about the need for social change and sparked his desire to serve as an activist and advocate.

Since 1973 Jeff has been a leader in the Disability Rights Movement. Jeff graduated Phi Beta Kappa from the University of California, Berkeley. He received the departmental citation in social welfare for developing innovative recreation and social development programs for children and teens with visual disabilities. Following graduation, Jeff was hired by the Center of Independent Living, where he developed the first programs for adults with visual disabilities.

Jeff received his Master’s degree in Rehabilitation Administration from the University of San Francisco. Following his graduation, he began a decade of work on the forefront of rehabilitation for adults with visual disabilities. His work was recognized primarily for developing the first comprehensive computer access center, which drew international attention for its effectiveness in opening new employment opportunities for individuals with visual disabilities.

Jeff began writing and performing original music in 1965. His publishing company, Music from the Heart, has brought a broad spectrum of music, books, and innovative historical productions to the public.

In 1992, Jeff started working full-time writing music for all ages, including books of classroom activities and a school musical addressing the scourge of bullying and the experience of exclusion, ridicule, and violence. These published materials led to a decade of life on the road where he performed and spoke at schools and universities in 47 states and internationally.

Through his published materials, assemblies, and residencies, Jeff has helped many schools understand that disability and diversity are a healthy and needed aspect of all communities. His artist-in-residence work has resulted in many schools developing cherished school songs, mottos, and pledges.

Jeff’s passion and advocacy reached into yet another new area after he donated a kidney to save the daughter of a friend—an act that left him with severe and chronic pain. This experience has enabled him to shine a light on the plight of wounded kidney donors, a forgotten and unprotected group of selfless people, many of whom now suffer from untreated, lifelong pain.

Jeff has served as a National Public Radio Morning Edition commentator. He has also been featured on The CBS Evening News, the television program 20/20, in National Geographic, and in a BBC documentary on the U. S. Disability Rights Movement. Jeff has been invited to the White House three times and has presented his unique blend of engaging, original music, eloquent public speaking, and humor to audiences worldwide.

Jeff speaks and writes with the authority of one who has lived a successful life, despite multiple and profound personal losses. The Highlights section provides a snapshot of his public speaking history and a bibliography of Jeff’s diverse publications.

Jeff’s memoir Grit: A Family Memoir on Adversity and Triumph was released in 2016. This book is the story of Jeff and his family’s life through the 60 years that changed the experience of disability in America and the world.

Click here to visit our store for the complete Music from the Heart catalog of CDs and books.

Many of us advocate for people with disabilities feel isolated in today’s political climate. Fortunately, there is a force that can balance things out in our hearts and minds. It's the belief that one individual who is determined to make a difference in the world, can, with desire, drive, dedication, discipline, passion, and persistence. The world can be altered and billions of people’s lives can be impacted positively in an unimaginable way. This describes you…